This is undoubtedly the most flavoursome base for a vegetarian stock I’ve ever tasted – it’s simply exquisite. And that’s due to the cooking liquor produced whilst boiling the dried beans themselves. It really is astonishingly good. What surprises me is the fact that fresh broad beans, as they’re called here in the UK, are only ever for sale locally for a couple of weeks during midsummer. According to this article 500,000 tonnes are produced in the UK (and those figures are from last year), with most of them exported to the Middle East, presumably Egypt. Wouldn’t it then be ironic that I’m buying a product that clearly states, produce of more than one country, as chances are they were grown here, then dried and packaged in Egypt or the Middle East and shipped right back to us! Actually, what I find even more surprising is that they’re only for sale here, as fresh, for several weeks. Otherwise they’re sold in smallish cans that are only ever found within the tinned vegetable section of supermarkets – they’re a legume, people! Those, in cans, are small. And something I’ve been eating for years, mostly with tuna and pasta. More recently I’ve been grabbing bags of fresh beans during summer and relishing the whole process of podding them, then cooking and, when cool, removing the outer skin. To do that, incidentally, hold one in your hand (between thumb and first finger) with their inner curve facing outwards, pinch and tear that curve with your other thumb, squeeze the bean on its outer curve and they should plop out. That easy. And when they’re double-shelled their colour really is quite amazing. Such a brilliant green. With these dried split beans I’ve bought, on the other hand, their colour is a dullish beige – shame, as I don’t normally do beige! Which is why the soup itself is so pale. Some might suggest wishy-washy. I don’t care! Once you taste this soup you won’t either. 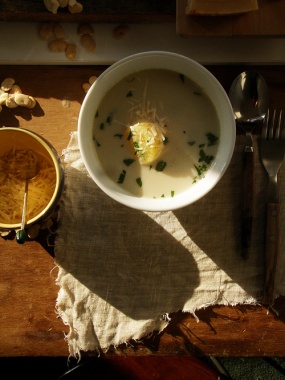 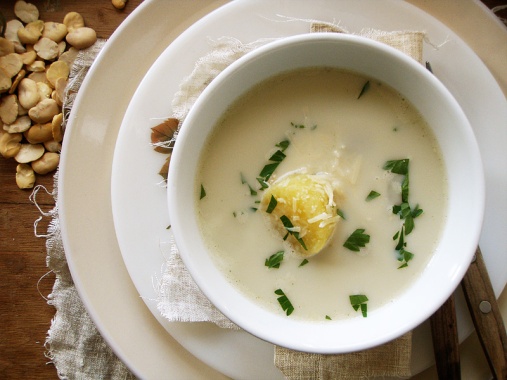 The inspiration for this soup came from one of Seana’s recent posts on COTTAGE GROVE HOUSE, Yoghurt & Fava Bean Soup (featured on Fiesta Friday #15 Featured list, chosen by the hostess Angie, with co-hosts Saucy Gander and myself), which I’ll have to try during summer when fresh broad beans (as they’re called here in the UK) are available. Until then I’d decided to buy in a pack of these dried split beans instead. And I’m now so thrilled that I did. What a revelation this has turned out to be. As I’m looking forward to experimenting more with vegetable broth like bases, that will include some of the broad bean cooking liquor, for my soups, sauces and gravies. How wonderful to be able to have a vegetarian stock or base that rivals that of a chicken broth – at last!

NOTE: It’s not absolutely necessary to soak the dried split broad/fava beans overnight as they do cook relatively quickly, compared to the whole dried type. If using the latter then those do need to be soaked overnight, their outer shells removed the following day and discarded before cooking them (unless stated otherwise, as the whole bean can be eaten – including the pod!).