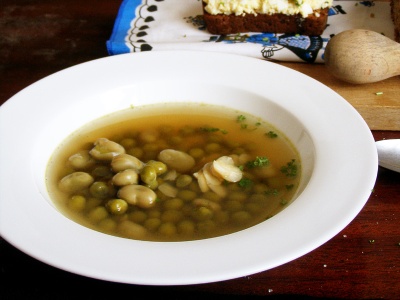 Like my previous post I decided to plate this and shoot and if photos turned out okay I’d go with. It’s a plain enough little Broad Bean and Pea Soup that’s exactly what I’ve needed right now . But it can be jazzed up; freshly podded peas and broad beans when available, in my case for several weeks during summer only. And a little or lots of a favourite chorizo added. I’d use thin dry cured Polish sausages called kabanos, pan-fried without oil to render them of their fat. According to a longhand version in one of my many notebooks this would have included ginger with garden or English peas without the broad beans. Recently, when I spotted the recipe again, I immediately thought of using home-made mayo and capers wrapped in smoked salmon on toasted slices of my home-made wheaten bread. However, as there has been the distinct possibility of overdoing it on oily fish, regardless of how remote that may be, I decided against buying salmon – that’ll have to keep for another time. Last night I finished off leftovers with the egg mayo and smoked ham (another ingredient I’m trying to avoid as in all processed meats) and that was so good.

What isn’t so good is this wretched cold that isn’t nearing its halfway stage quite yet. Although, today I seem to be sneezing and blowing my nose a lot less – I just can’t smell anything. I’ve gone through rolls of toilet roll already, to the extent I could be accused of single-handedly causing the depletion of the Rain Forests. Could recycle bath towels into hankies I suppose – in my case don’t bother to cut and resize as I’ll just wrap the entire towel around my face. Hold on, a nappy might be better. Nah, with Velcro and one sneeze that’d be enough for it to stick to my face – like Super glue.

Separating the egg yolk and white (albumen) as the egg yolk needs to be poached in boiling water. The egg white can be added to either scrambled eggs or an omelette.

After whisking in the oil to the mashed egg yolk and just before seasoning with freshly ground sea salt and black pepper.

After adding the mayo the eggs need to mashed even finer.