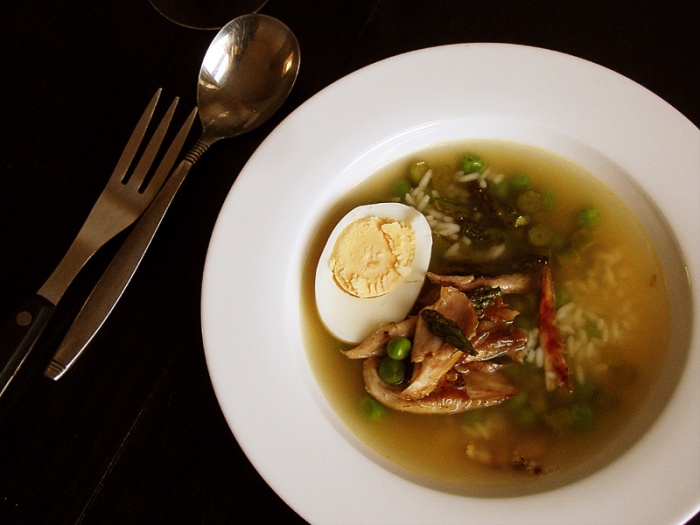 Having Asparagus, Chicken and Pea Soup this weekend was well timed. Yes, I have a vicious head cold. No, it’s not man flu. My throat this morning felt like razors. Although, after gargling with salted water it’s eased off a bit.

So, that should help to explain the simplicity of the photos as I really wasn’t in the mood to cook never mind blog. This is along the same lines as a thin broth-like soup with rice and boiled egg I had in Toledo, Spain – years ago. And I hate to admit this but the last time I cooked asparagus was in Barcelona, for a college chum’s barbecue on her roof terrace five years ago. After shopping in a large Mercado nearby, my friend had chosen crayfish which we hadn’t had before. Neither had we tried an egg sausage. One of the great things about shopping in any city with one of the, now, locals was to ask, ‘what is that’ in the local language. So, after trying a piece proffered to us. the egg sausages were hastily bought for starters, along with other bits and pieces. My contribution of a side was thin asparagus wrapped in Serrano ham with a pinch of black pepper, a tiny knob of butter and a drizzle of olive oil. Wrapped in tinfoil those were merely placed to the side of the barbie. The other’s there told me they hadn’t had that type of thing before, which surprised me. I thought everyone had tried that. Anyway, this turned out to be one of the best barbies I’ve ever been to. Okay, I’ve blathered enough. I am aware that this is the first post in a week. I’ve been busy updating my previous post, Cauliflower and swede soup with far better looking food on the plate. Only took the fourth attempt! As for this soup I wasn’t happy with the quality of the asparagus. It may be my palate is a little off today. But I could just about taste it. Must check online for hints on how to pick the best asparagus available. Well, I read last night in a magazine published by one of my local stores, would you believe it, that stems of asparagus shouldn’t be boiled as they will loose their flavour. That’s pretty much what I did as the chopped stems were added to the stock. They must be cooked separately, like the tips, by pan-frying, steaming or griddling. Now I know!

Asparagus, Chicken and Pea Soup, with rice and boiled egg

After pouring the stock through a metal colander into a suitable bowl, and after the bay leaf pieces and garlic have been picked out and set aside, the remaining veg are mashed or squeezed with the back of a large metal serving spoon to extract as much of their juice as possible. Then the stock is strained again through a fine wire metal sieve.

Snapping the asparagus spears, without too much force as they give where the woody part meets the edible. The woody parts can be trimmed, split in half and used to help flavour the stock.

Chopping the stems, after snapping off the woody parts, and keeping the tips separate to be cooked in a little oil. The stems are cooked separately from the soup as boiling them reduces their flavour. When the soup is needed add both and heat through.